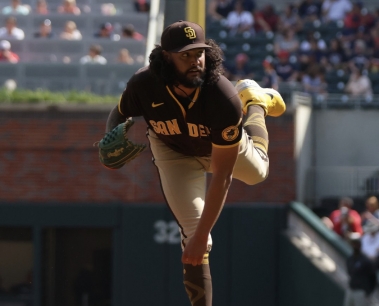 May 14, 2022 (Atlanta) - Last night was a fun game and even better, the Padres came away with the win.  They tried again today with Sean Manaea on the mound against Charlie Morton for Atlanta.

Both pitchers were cruising until Matt Olson came to bat in the first and smashed his fourth homer of the season to right and the Braves led 1-0 after one.

The Braves threatened again in the third and succeeded when Ozzie Albies hit a nice double and scored William Contreras and Atlanta led 2-0 after three.

The Padres got one back in the fifth with a gapper to center from Trent Grisham for a double and a Wil Myers score and the Braves led 2-1 after five.

The Padres were able to tie the game in the eighth thanks to bad fielding from the Braves, allowing Grisham to reach third and Jorge Alfaro drove him in with the single to right.  Kenley Jansen came in and gave up a fielder’s choice to Manny Machado with the bases loaded, allowing two to score.  Jurickson Profar scored when Eric Hosmer beat out a throw to first.  The Braves fought back in the home half with a single up the middle from Albies that scored Adam Duvall.  And Marcell Ozuna tied it up on one swing of the bat with an absolute towering two-run blast to left.  Austin Riley gave Atlanta their lead back with a line drive double to left that scored Travis D’arnaud and the Braves stole what should have been a Padres win with a 6-5 victory in game two.

Get up early to watch the game tomorrow at 8:35 a.m. and it will only be streamed on Peacock.  Grossmont High alum Joe Musgrove starts against Kyle Wright for Atlanta.