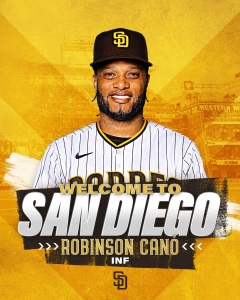 May 13, 2022 (San Diego) - In a shocking move, the Padres have signed eight-time All-Star Robinson Cano to a major league deal.

Cano, 39, was designated for assignment by the Mets on May 2 despite having two years left on his contract.  He isn't the same player he once was, having batted .195 with one homer and three RBIs in 2022, but will still be a valuable left arm for the Padres.  He will wear number 24.