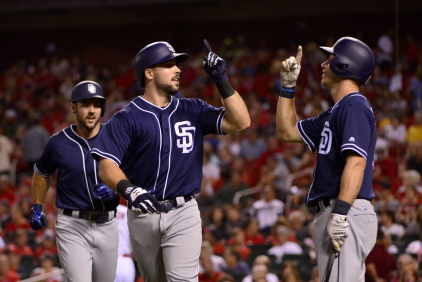 August 22, 2017 (St. Louis) - The Padres said goodbye to Petco Park again and found themselves in St. Louis taking on the Cardinals and hoping to get the bats hot again.  Clayton Richard started tonight’s game one against Lance Lynn for the Cardinals.

This one was wild.  The Padres got the upper hand first with Yangervis Solarte's three-RBI double in the third.  Clayton Richard, Manuel Margot and Jose Pirela all scored and the Padres took a 3-0 lead.

But in the fourth, the Cardinals flew back.  Jedd Gyorko launched a two-run homer to left and Stephen Piscotty finished the job with a solo homer and we were all knotted up once more at three.

Solarte came through again in the fifth with his second RBI double of the game that scored Margot and the Padres took the lead again, 4-3.

But Yadier Molina erased that lead too with a homer in the Cardinals’ half of the sixth to tie the game at four.

The Padres finally cracked the game open in the seventh when Pirela lunged out and singled to score Margot to kick Matt Bowman off the hill.  Zach Duke came in, but he only made things worse.  Or better, in our case.  Matt Szczur singled with the bases loaded to drive in two more.  Call PETA because Austin Hedges drove a dagger through nine birds’ hearts with a three-run homer to left off the top off the hall-of-fame wall and a six-run seventh gave the Padres a 10-4 lead.

Solarte didn’t think that was enough.  He jacked a two-run bomb to right in the eighth and the Padres took game one in a commanding way, downing the Redbirds 12-4.

Game two is tomorrow at 5:15 p.m.  Jhoulys Chacin starts against Luke Weaver for the Redbirds.