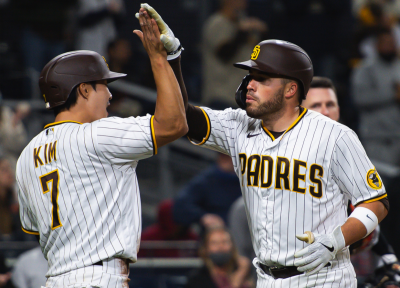 By Liz Alper
Photo via @padres on Twitter
April 6, 2021 (San Diego) - The Padres dropped game one to the Giants last night, so they looked to rebound tonight against Aaron Sanchez for San Francisco.  He faced Yu Darvish.
Brandon Crawford kicked things off for the Giants in the third with a solo homer to right and the Giants led 1-0.
Eric Hosmer got it back for the Pads in the home half of the third with a single that scored Jake Cronenworth and we were tied at one after three.
The game was deadlocked until the seventh when Victor Caratini blasted a two-run bomb to right and the Padres took it to the house to win 3-1.
UP NEXT
Tomorrow’s series finale is at 1:10 p.m.  Kevin Gausman starts for San Francisco against Blake Snell.
NEWS