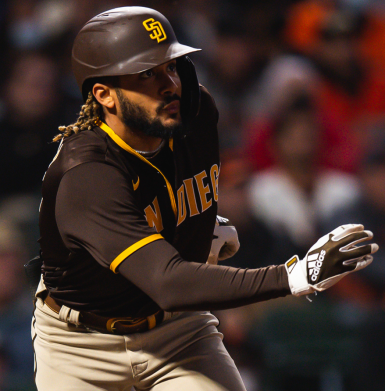 By Liz Alper
Photo:  Fernando Tatis Jr. via @padres on Twitter
September 13, 2021 (San Francisco) - After an embarrassing performance in L.A., the Padres tried their luck further north in four games against the Giants.  Yu Darvish started tonight’s game one against Dominic Leone for San Fran.

This one was all Giants right off the bat.  Tommy La Stella launched a solo homer in the first, followed by LaMonte Wade’s triple that scored Darin Ruf.  Evan Longoria capped it off with a three-run bomb and the Giants jumped out to a 5-0 lead after one.

Fernando Tatis Jr. got the Padres’ lone run in the third with a double that scored Trent Grisham.  The Giants led 5-1 after three.
Mike Yastrzemski added on in the fourth with a solo homer in the fourth.  Brandon Belt mashed a two-run homer to right that almost made it into the ocean and the Giants led 8-1 after four.
Longoria added one more for good measure in the eighth with a single that scored Wade and the Giants crushed the Padres 9-1.  The Friars fall to 74-69 and the Giants clinch their first postseason berth since 2016.
UP NEXT
Game two tomorrow is at 6:45 p.m.  Jake Arrieta starts against Anthony DeSclafani for San Fran.
TRANSACTIONS