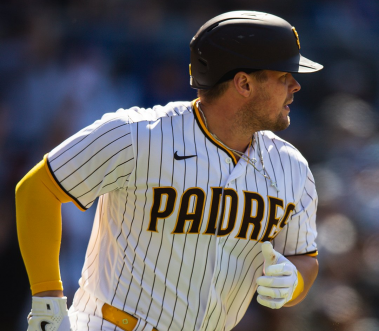 By Liz Alper
Photo:  the Padres couldn't pull a series win despite Luke Voit's first two homers as a Padre.  Via @padres on Twitter
May 11, 2022 (San Diego) - The Padres got one back last night, so they tried for the series win tonight against Keegan Thompson for the Cubs against Nick Martinez.

Things got started right away with Willson Contreras’ solo homer in the first, but Eric Hosmer quickly tied it in the home half with a single that scored Jurickson Profar and we were tied at one after one.

Luke Voit hit his first homer as a Padre with a solo to left in the second and the Padres led 2-1 after two.
But from there, the Cubs took over.  Patrick Wisdom singled to score Contreras in the fourth, Frank Schwindel singled to score two and Jason Heyward singled to left to score Schwindel and the Cubs led 5-2 after four.
With the bases loaded in the sixth, the Padres threatened and Voit scored on catcher’s interference.  That was all they could get and the Cubs led 5-3 after six.
Hosmer kept the Padres close with a solo homer to left center in the seventh.  And Voit tied it up again with his second home run as a Padre, a shot to left and we were tied at five after seven.
But the Cubs got the upper hand again with Alfonso Rivas’ single up the middle in the eighth with the bases loaded that scored two and the Cubs took the series from the Padres with a 7-5 win.
UP NEXT
The Padres get a day off tomorrow before heading to Atlanta for the weekend.  First pitch against the Braves Friday is at 4:20 p.m. and will be free to watch on Apple TV+.  Yu Darvish starts against Max Fried for Atlanta.
TRANSACTIONS