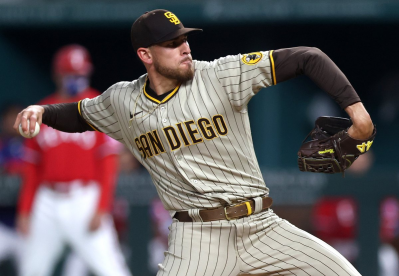 By Liz Alper
Photo via @BaseballQuotes1 on Twitter
April 9, 2021 (Arlington, Texas) - The Padres were back in action tonight in their first road trip of the season against the Rangers.  Grossmont High alum Joe Musgrove started against Kohei Arihara for Texas.

The Padres struck first in the second (that seems to be the magic inning this season) with a double from Wil Myers that scored Eric Hosmer.  When Leody Taveras dropped a caught ball that got Tommy Pham out, Myers was able to score from second and the Padres led 2-0 after two.

Manny Machado doubled on a line drive to left center to score Trent Grisham and the Padres had a huge night.  Not just at the plate, but on the mound too, as Musgrove pitched the first no-hitter of the season for the Padres, who become the first active MLB team to achieve a no-hitter so far this season.  AND, even MORE beautiful, it’s the first no-hitter in Padres history and it’s an East County kid that does it.  The Padres won 3-0.
UP NEXT
Game two is tomorrow night at 4:05 p.m.  Chris Paddack will start against Jordan Lyles for Texas.