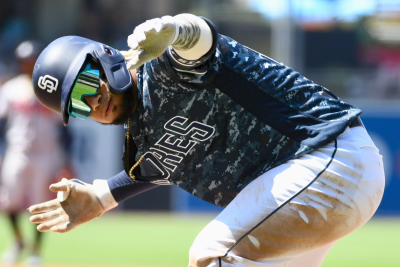 July 14, 2019 (San Diego) - The Padres started off the second half of the season in usual Padres fashion:  by losing the first two games of their returning series. Mike Soroka started today’s game three finale for the Braves against Cal Quantrill.

It stayed scoreless until the eighth.  Freddie Freeman saved this one from another extra innings disaster by giving the Padres a disaster in regular innings with a three-run blast to right.   It was his first hit of the series. Nick Markakis singled up the middle to score Josh Donaldson and the Braves led 4-0.

The Padres got on the board in their half of the eighth with the bases loaded.  Josh Naylor singled up the middle to score Fernando Tatis, Jr., but that was all they’d get as the Pads were swept by the Braves 4-1.

The Padres get a day off tomorrow before traveling to Miami to face the Marlins.  Game one is Tuesday at 4:10 p.m. Jordan Yamamoto will start for the Marlins.