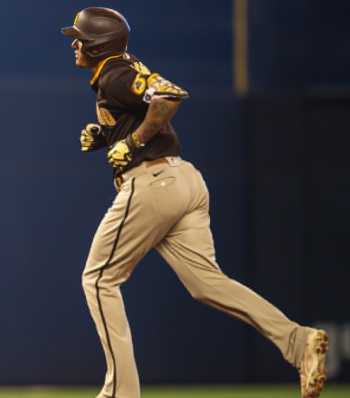 By Liz Alper
Photo:  Manny Machado via @padres on Twitter
July 25, 2021 (Miami) - Yesterday was an incredibly frustrating day for the Padres; the umps were not on their side and the Marlins ruined their chances of a sweep.  But they still had a chance to take the series today with Yu Darvish on the mound against John Curtiss for Miami.

The Padres were back to normal in the first with a single from Eric Hosmer that scored Tommy Pham and the Friars led 1-0 after one.

The Marlins tied the game on Deven Marrero’s solo homer to right in the third and we were tied at one after three.
Thankfully, Manny Machado knew what he had to do in his hometown and knocked a solo homer out of the yard to center in the fourth and the Padres led 2-1.
But not for long; Brian Anderson hit a homer to the exact same spot as Marrero’s homer to tie the game in the home half of the third and we were tied at two after four.
And the Marlins eventually took the lead in the fifth when a guy with a fancy name, Magneuris Sierra, singled on a line drive to left and scored Marrero.  Starling Marte singled to score Sierra and Miami led 4-2 after five.
The Fish netted more runs in the sixth with Sandy Leon’s double to right that scored two.  A pitching change didn’t help, as Lewis Brinson hit a rocket of a three-run homer off of Nabil Crismatt and the Marlins took a big 9-2 lead after six.
Brian O’Grady tried to start a rally in the ninth with a solo homer to right, but that’s all the Padres would get and the Marlins were able to split the series and get a 9-3 win.  The Padres fall to 58-44.
UP NEXT
The Padres fly home after the game today and get a day off tomorrow.  They’re giving the NL a break for two days and hosting the Athletics for two games.  First pitch Tuesday night is at 7:10 p.m.  James Kaprielian will start for Oakland against a pitcher to be named.
TRANSACTIONS