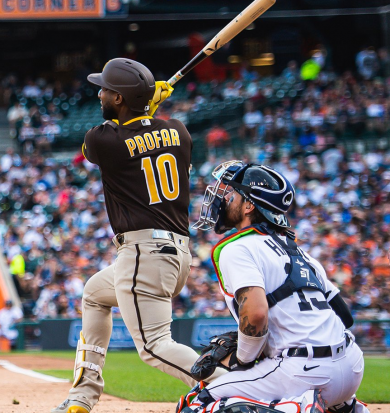 By Liz Alper
Photo via @padres on Twitter
July 25, 2022 (Detroit) - After a successful weekend in New York, the Padres headed west for a rare interleague matchup with the Tigers.  Sean Manaea started tonight’s game one against Drew Hutchison for Detroit.
The Padres got the upper hand first in the third with a solo homer from Jurickson Profar, but from the home half on, it was all Tigers.  Javy Baez hit a sac fly to score Harold Castro and Eric Haase blew the game open with a grand slam and the Tigers led 5-1 after three.
Jeimer Candelario hit a solo homer in the fourth, Baez doubled to score Castro, the other Castro, Willi, scored, Baez scored on a wild pitch and the Tigers led 9-1 after four.
Trent Grisham helped a little bit with a double that scored Eric Hosmer in the fifth, Ha-Seong Kim singled to score two, but Candelario hit a two-run homer in the home half of the fifth and the Tigers led 11-4 after five.
Miguel Cabrera, the legend, hit a solo homer in the sixth and the Tigers bowled over the Padres in game one with a 12-4 win.
UP NEXT
Game two is tomorrow at 4:10 p.m.  Mike Clevinger starts against SDSU alum Garrett Hill for Detroit.