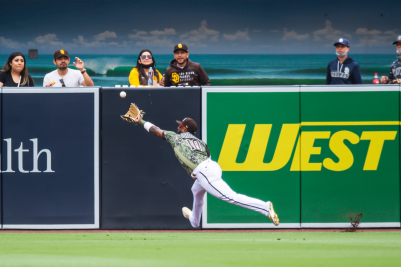 By Liz Alper
Photo:  Jurickson Profar's great catch in center field was the lone defensive highlight for the Padres todayia @padres on Twitter
May 2, 2021 (San Diego) - The Padres have earned two big wins in the past two days.  Today, they looked for the sweep against the Giants with Kevin Gausman on the mound for San Fran against Grossmont High alum and Padres sole no-hitter owner Joe Musgrove.

Fernando Tatis Jr. started the Padres off on the right foot in the first with a skied homer to right to give the Padres a 1-0 lead after one.

But the Giants managed to tie it in the third on a Tommy La Stella single to left that scored Curt Casali.  Mike Tauchman then gave San Fran a big go-ahead with a three-run blast to right and the Giants led 4-1 after three.
La Stella added more in the fifth with a triple (would have been less if Trent Grisham hadn’t misplayed it) that scored Gausman.  Wilmer Flores hit a sac groundout that scored La Stella and the Giants increased their lead to 6-1 after five.
The Giants tacked on one more in the ninth with the bases loaded.  Steven Dugger crossed the plate on a walk given up to Tauchman and San Fran avoided a sweep with a 7-1 win.  The Padres fall to 16-13.
UP NEXT
The Giants leave San Diego and are replaced by the Pirates.  Game one is tomorrow at 7:10 p.m.  Tyler Anderson will start for the Buccos against Miguel Diaz.