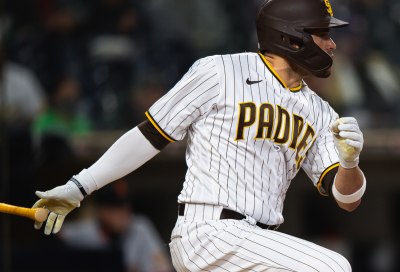 By Liz Alper
Photo via @padres on Twitter
April 5, 2021 (San Diego) - The Diamondbacks are finally gone and the Padres nearly swept them.  Now it was time to host the Giants for three games.  Anthony DeSclafani started tonight’s game one against Adrian Morejon.

The Giants started the scoring in the second with a solo homer to straightaway center from Darin Ruf and the Giants led 1-0.

Luckily, in the home half of the second, Victor Caratini saved the day with a double up the middle that scored Jurickson Profar and we were tied at one after two.
But the Giants reclaimed the lead in the fourth with ex-Ray Evan Longoria’s solo homer just over the right field wall and the Giants went back up 2-1 after four.
Caratini saved the day again in the sixth with a sac fly to center that scored Profar after Profar’s leadoff triple that tied the game at two after six.
But....the Padres made the mistake of playing a team with a Yastrzemski.  In the seventh, Mike Yastrzemski hit a solo homer to center to reclaim the lead for the Giants, kicking Craig Stammen out of the game.  Emilio Pagan came in and finished the job, but the Giants escaped with a 3-2 win.  The Padres have been pushed back to second in the NL West behind the Dodgers.
UP NEXT
Game two tomorrow night is at 7:10 p.m.  Aaron Sanchez starts for San Francisco against Yu Darvish.
NEWS