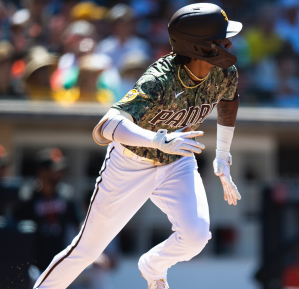 By Liz Alper
Photo via @padres on Twitter
July 10, 2022 (San Diego) - The Padres let the Giants have a good game yesterday, but they hoped to officially take the series today with Alex Wood on the mound for San Francisco against MacKenzie Gore.
The Giants opened things again in the second with a two-run homer from Thairo Estrada and San Francisco led 2-0 after two.
Wilmer Flores added on with another two-run homer in the third and the Giants led 4-0 after three.
Austin Wynns singled to score David Villar in the fourth and Mike Yastrzemski tripled to score Wynns.  Austin Slater singled to score Yastrzemski and finally, Luis Gonzalez singled to score Slater and the Giants increased their lead to 8-0 after four.
Yaz added more in the seventh with a single that scored Villar.  Joey Bart scored and the Giants led 10-0 after seven.
Bart singled in the eighth to score Estrada and the Giants led 11-0 after eight.
The last run came on a Flores solo homer and the Giants left San Diego in ruins with a 12-0 win.
UP NEXT
The Padres are back on the road with four games in Colorado to start the week before the All-Star break.  Game one is tomorrow at 5:40 p.m.  Sean Manaea starts against Jose Urena for the Rockies.