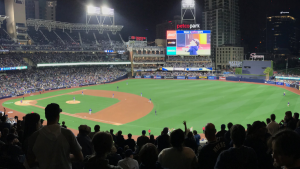 The Padres weren’t so lucky tonight and didn’t get any magic from Hunter Renfroe.  The Cubs started it all in the second with Wilson Contreras’ double that scored Jason Heyward and Chicago took a 1-0 lead.

The Padres did get help, however, from Austin Hedges, who belted a two-run homer in the Padres’ half of the second to boost the Friars into the 2-1 lead.

But Kyle Schwarber tied it up in the fifth with a solo home run.

Did we say the Padres didn’t get any help from Renfroe?  We meant in the early going.  In the Padres’ half of the fifth, he doubled to score two.  Hedges doubled and two more scored.  The Padres easily took game two 6-2 to win the series.

Day baseball tomorrow for game three.  First pitch is at 12:40 p.m. and Jake Arrieta starts for Chicago against Luis Perdomo.