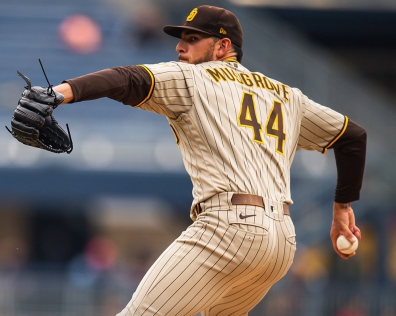 By Liz Alper
Photo:  Grossmont High alum Joe Musgrove posted another impressive outing, with eight strikeouts in seven innings.  Via @padres on Twitter
May 1, 2022 (Pittsburgh) - The Padres had an impressive April, now it was time to kick off May and hopefully a won series against the Pirates.  Grossmont High alum Joe Musgrove started against Mitch Keller for the Pirates.

We went three innings scoreless, then Manny Machado singled to score Austin Nola in the third to give the Padres a 1-0 lead after three.

Trent Grisham added some insurance in the seventh with a single that scored two.  The Pirates got on the board in the home half of the seventh with Roberto Perez’s single that scored Jack Suwinski and the Padres led 3-1 after seven.
The Bucs kept it close with Michael Chavis’ sac fly in the eighth that scored Bryan Reynolds, but the Padres led 3-2 after eight.
They pulled away in the ninth, though, with C.J. Abrams’ sac fly to deep right center that scored Jose Azocar.  Miguel Yajure came in to pitch and Jake Cronenworth made him pay with a line drive to left that scored Nola and the Padres took the series with the Bucs 2-1 with a 5-2 win.
UP NEXT
The Padres get a day off tomorrow before ending the road trip with two games against Cleveland.  First pitch against the newly-branded Guardians is at 3:10 p.m. on Tuesday.  Mike Clevinger starts against Zach Plesac for Cleveland.