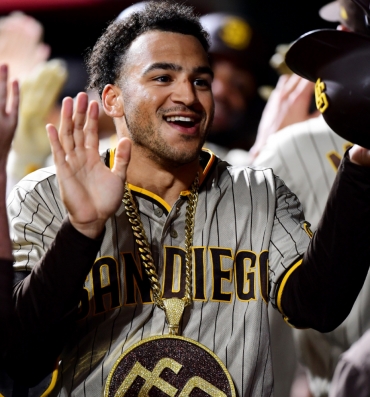 Photo: Trent Grisham's grand slam in the fifth gave the Padres the series win. Via @padres on Twitter

June 30, 2021 (Cincinnati) - The Padres barely scratched out a win last night.  It was on to game two and a series win tonight.  Grossmont High alum and Padres sole no-hitter owner Joe Musgrove started against Vladimir Gutierrez for Cincinnati.

The Reds kicked things off in the first in a big way with Nick Castellanos’ three-run blast to right.  Kyle Farmer scored Joey Votto and the Reds led 4-0 after one.

From then on, it was all Padres.  Trent Grisham and Wil Myers homered in the second, followed by Fernando Tatis Jr. in the third and the Padres trailed by one, 4-3.

Votto added some padding for the Reds in the home half of the third with a solo shot and the Reds led 5-3 after three.

But the rest was all Padres and it was done on one swing of the bat.  In the fifth, Grisham launched a grand slam to get Slam Diego the 7-5 win and take the series and move to 49-33.

The rubber match is tomorrow at 4:10p.m.Ryan Weathers will start against Luis Castillo for the Reds.