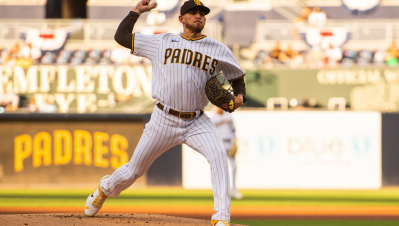 By Liz Alper
Photo:  Grossmont High School alumnus Joe Musgrove went for six innings and struck out eight.  Photo via @padres on Twitter
April 3, 2021 (San Diego) - First Saturday game of the season!  And today was a very special day as Grossmont High School alum Joe Musgrove took the mound for his very first start in a Padres uniform.  He faced Caleb Smith for the Dbacks.

Manny Machado got things started early for the Padres with a solo homer in the first.  Ha-Seong Kim followed him up with an RBI single that scored Wil Myers and the Padres led 2-0 after one.

The Friars continued their slaughter in the second with Myers’ two-RBI double to increase the lead to 4-0 after two.
Machado singled in the fourth to score Fernando Tatis Jr. and the Padres led 5-0 after four.
In the sixth, Myers struck again with an RBI double to left that almost left the yard.  Machado scored.  Jake Cronenworth followed that up with an RBI double to left of his own to score Myers and the Padres took the series with a commanding 7-0 win and remain in first in the NL West with a 3-0 record to start the season.
UP NEXT
The Padres have an Easter Sunday showdown against Arizona to finish off the series.  First pitch is at 1:10 p.m.  Taylor Widener starts for Arizona against Chris Paddack.