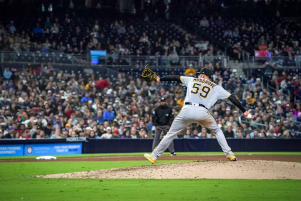 Photo:  Joe Musgrove, the Grossmont High alumnus, was phenomenal in his return to San Diego:  shutting out the Padres through all seven of his innings of work.  Via @Pirates on Twitter

June 29, 2018 (San Diego) - It’s always good to be back in San Diego after a typical Padres road trip in which they lose most games but manage to win a couple.  Tonight, the Pirates sailed in for a weekend series.  Grossmont High alum and El Cajon native Joe Musgrove started for Pittsburgh against Eric Lauer.

The Padres took to Padres’ing early.  After a few good hits by the Pirates in the first, a passed ball got by Austin Hedges, allowing Josh Bell to come home and give the Buccos an early 1-0 lead.

In the third, after Starling Marte ran around the bases thanks to Padres’ing, Bell drove him in with a double on a hopper to left.  More Padres’ing followed when the Padres bungled a potential double play that allowed Bell to score.  Lauer got two outs and thought that was the end of it, but Gregory Polanco smacked a two-RBI line drive to right to make it 5-0 Pirates in a four-run inning.

Jordy Mercer kicked off the fourth with his fifth home run of the year that sailed just over Manuel Margot’s head in center to make it 6-0 Bucs.

Musgrove’s fellow Grossmont teammate and La Mesa native Steven Brault came in in the eighth and gave up a sac RBI groundout to Cory Spangenberg that scored Eric Hosmer in the eighth. Christian Villanueva continued the rally with a looped RBI single into center that scored Wil Myers to make it 6-2.

Margot got Mercer back for the home run in the ninth with an RBI single over his head into left to score Hunter Renfroe. Despite the rally, the Grossmont High boys got the job done and the Pirates took game one with a 6-3 win.

Game two tomorrow night is at 7:10 p.m., a rare late start for a Saturday home game.  Rancho Bernardo alum Trevor Williams will start for the Pirates against Joey Lucchesi.