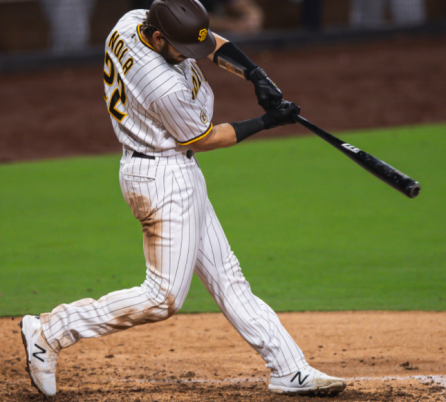 September 10, 2020 (San Diego) - After sweeping the Rockies, the Padres welcomed the Giants for a four-game weekend series tonight.  Trevor Cahill started for the Giants tonight against Chris Paddack.

Unlike the series with the Rockies, the Padres were the ones who struck first in the opening inning with Mitchy Two-Bags’ (Mitch Moreland for our non-sports readers…) two-RBI double to left center that scored two runners.  Austin Nola came up next and sent an RBI double to left on the first pitch that scored Moreland and just like that, the Padres were up 3-0 after one.

The Giants answered in the second with a towering home run to left from Wilmer Flores.  The Padres still led 3-1 after two.

Manny Machado added a big solo home run in the third to give the Padres a 4-1 lead.

Jorge Ona made quite an entrance to the big leagues in the fourth by absolutely blasting a solo shot to left field for his first major league hit and run--literally--and the Padres led 5-1 after four.

Fernando Tatis Jr. added one more in the seventh with a long sac fly to right center that scored Jurickson Profar and the Padres were able to take game one with a 6-1 win. The Padres remain in second place in the NL West at 29-17.