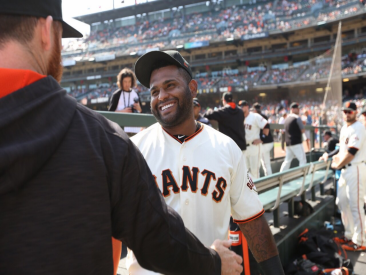 October 1, 2017 (San Francisco) - Last game of the year.  In three hours, we will all be free.  Luis Perdomo started against Johnny Cueto for the Giants.

Going out with a bang seemed to be the Padres’ plan, until it wasn’t.  Erick Aybar doubled in the first and Yangervis Solarte hit an RBI single to put the Padres up 2-0.

Pablo Sandoval grounded out in the second to bring Buster Posey Home, put the Giants on the board and cut the lead in half to 2-1, but Hunter Renfroe extended the lead with a solo homer in the third to make it 3-1 Padres.

Travis Jankowski hit an RBI single in the fourth to make it 4-1, but little did they know that the Giants were plotting to mount their comeback.

Brandon Crawford hit an RBI double in the home half of the fourth, Jarrett Parker hit an RBI single and Crawford scored on Nick Hundley’s force out to tie the game.

Were we going to extra innings in the last game of the season?  Of course not, because Sandoval blasted a walk-off home run in the ninth to give the Giants their first series win over the Padres this season.  Rest assured, that walk-off wasn’t a total loss because the Giants aren’t going to the postseason either.  Yet strangely, a walk-off home run is such a fitting end to this Padres season.

And so concludes the ECM Padres Report for the 2017 season.  We hope you enjoyed our reporting and remember:  they’re rebuilding!