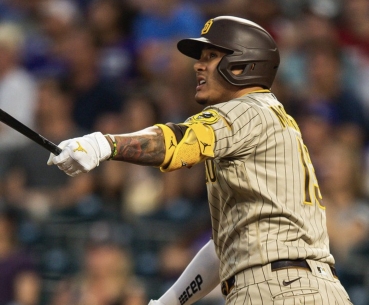 June 18, 2022 (Denver) - The Padres dropped their first game since being in first place last night, but they still have a firm grip on the position.  They tried to even the series with Colorado tonight with Nick Martinez on the mound against German Marquez for the Rockies.

C.J. Cron started this game the way he started last night’s:  with a two-run homer in the first and the Rockies led 2-0 after one.

Luke Voit narrowed the gap in the third with a double that scored Jake Cronenworth and the Rockies hung onto a slim 2-1 lead after three.

But everything changed when Manny Machado blasted a two-run homer in the fifth.  Voit scored on a Nomar Mazara groundout, but the fun was short-lived as Charlie Blackmon erased the lead in the home half with a two-run, game-tying homer and we were tied at four after five.

Ryan McMahon broke the tie in the eighth with a solo homer to deep right and the Rockies took the series on a late homer with a 5-4 win.

The rubber game is tomorrow at 12:10 p.m. for Father’s Day.  Blake Snell starts against Antonio Senzatela for the Rockies.