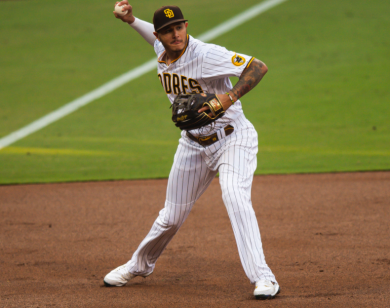 August 25, 2020 (San Diego) - The Padres continued interleague play tonight with a visit from the Mariners.  Marco Gonzales started for Seattle against Chris Paddack.

The Mariners took the lead first with runners at first and third in the first.  Kyle Seager hit a line drive sac fly to center to score J.P. Crawford.  Evan White singled to right on a line drive to score Kyle Lewis and the Mariners jumped out to a 2-0 lead after one.

Seattle added on in the second with a long two-run home run to right by Crawford to make it 4-0 Mariners after two.

Eric Hosmer helped the Padres a little bit in the third with a two-run homer just inside the right field foul pole to cut the Mariners’ lead in half.  SDSU alum Ty France brought Wil Myers home from second with an RBI double to the gap in right center and just like that, it was 4-3 Seattle after three.

But the Mariners pulled away again in the sixth with Austin Nola’s solo home run to left.  Crawford doubled to score White and kick Tim Hill out of the game.  The Mariners increased their lead to 6-3 after six.

White drove in another run in the seventh with runners at the corners with a line drive single to right that scored Seager and kicked out Javy Guerra.  Pierce Johnson came in to relieve and gave up a single to shallow center off the glove of Fernando Tatis Jr. by Tim Lopes to score Nola and the Mariners were able to take game one from the Padres with an 8-3 win.  The Padres remain in second place in the NL West with an 18-13 record.