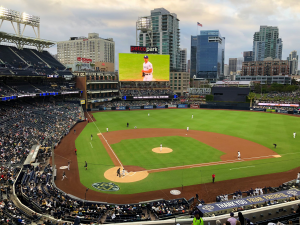 By Liz Alper
Photo via @ on Twitter
June 1, 2019 (San Diego) - The second-place Padres opened June by welcoming two NL East opponents to Petco Park, starting with the Marlins, whom they won 5-2 against last night.  Jose Ureña started game two tonight for the Marlins against Nick Margevicius.
Another milestone was set tonight as Josh Naylor blasted his first major league home run in the second, a line drive to right that was good for two runs and the Padres took a 2-0 lead after two.
The fun wore off in the fourth when Harold Ramirez doubled into left to score two and tie the game.  The Marlins took the lead on Martin Prado’s single that scored Starlin Castro and Miguel Rojas’ single that scored Ramirez and kicked Margevicius out of the game.  Luis Perdomo came in, but Garrett Cooper did more damage with a line drive RBI to right and the Marlins led 5-2 after four.
The Marlins added more on Bryan Holaday’s two-run homer just over the left center field wall in the sixth to put the fish up 7-2 after six.
The Padres cut into the lead a bit in their half of the sixth with Eric Hosmer’s single up the middle that scored Greg Garcia, but that was all they’d get as the Marlins added more in the ninth on Castro’s RBI single to left that scored Curtis Granderson and another RBI in J.T. Riddle on a fielder’s choice and the Marlins took game two 9-3.
UP NEXT
The Padres and Marlins wrap things up tomorrow with a 3:10 p.m. finale.  Trevor Richards starts for Miami against Matt Strahm.
Do you want to see more coverage of Padres baseball?  Please donate to support our nonprofit sports reporting:  https://www.eastcountymagazine.org/donate