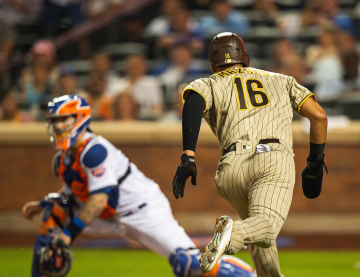 By Liz Alper
Photo via @padres on Twitter
July 24, 2022 (New York) - The Padres have taken two out of three from the Mets and today went for the sweep with Grossmont High alum Joe Musgrove on the mound against Carlos Carrasco for New York.

We were scoreless until the sixth when Eric Hosmer lined a ground ball double down the third base line, allowing Nomar Mazara to score from first.  However, it was short-lived as Pete Alonso jacked a three-run blast to right in the home half.  Luis Guillorme hit a falling single to left that scored Daniel Vogelbach.  Tomas Nido hit a double off the right field wall to score Guillorme and the Mets struck for five runs to lead 5-1 after six.

Alonso added more in the seventh with a double to left that scored Starling Marte.  When Manny Machado’s throw zipped right past Hosmer at first, it allowed two runners to score and Mark Canha to reach safely and the Mets to take an 8-1 lead after seven.
The Padres tried to scrape away in the eighth with a ground ball single to right by Austin Nola that scored Luke Voit and the Mets led 8-2 after seven.
Machado kicked off the Padres’ rally in the ninth with a long double to right that scored Jurickson Profar.  Jorge Alfaro singled to left to score Jake Cronenworth.  Machado scored on a fielder’s choice, but the Mets prevailed and avoided the sweep with an 8-5 win.
UP NEXT
The Padres head west for three interleague games with the Tigers.  First pitch from Detroit tomorrow is at 4:10 p.m. and will be MLB.tv’s free game of the day.  Sean Manaea starts against Drew Hutchinson for Detroit.