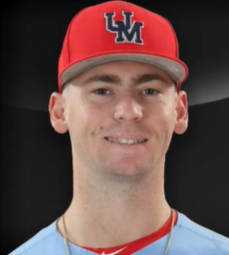 By Liz Alper
Photo:  Ramona High alum Derek Diamond was drafted in the sixth round, 170th overall by the Pirates.  Photo via mlb.com screenshot
July 18, 2021 (Los Angeles) - The Padres took all pitchers for all three picks on day one of the draft.  Click the cut to see who they picked today in Rounds 3-10 and keep an eye out for any East County high school or SDSU/East County college kids getting the call. 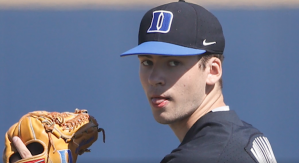 ROUND 3, 91ST OVERALL
HENRY WILLIAMS, RHP, DUKE (Hometown:  Darien, CT.  Photo right via mlb.com screenshot)
Another victim of Tommy John, but he’s shown improvement with a good slider.  Williams could have three or more solid pitches when he’s fully developed.  His most effective pitch is a low-80s slider.  He has a mid-80s changeup with speed but lacking in velocity.  Has had some arm issues in 2020 and ‘21.  If he stays healthy, he has the 6’5” athletic frame that can fill the strike zone. 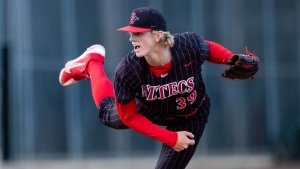 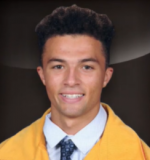 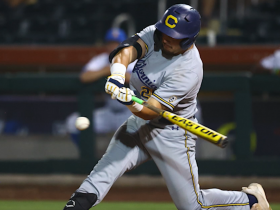 ROUND 5, 150TH OVERALL
NATHAN MARTORELLA, 1B, CAL (Hometown:  Salinas.  Photo left via mlb.com screenshot)
Previously drafted by the Red Sox in 2019.  He batted .388 in Pac-12 conference play and doesn’t strike out a lot.  He shows lots of patience at the plate and is a speed-over-strength hitter.  He’s a first baseman, but could be an effective designated hitter, as he hit 11 home runs this spring.
EAST COUNTY MENTION:  DEREK DIAMOND, P, OLE MISS/RAMONA HS.  SIXTH ROUND, 170TH OVERALL TO THE PITTSBURGH PIRATES
Previously drafted in 2019 by Arizona.  He’s been bumped up a few rounds from 40 to 6, but still didn’t have the best season as a Rebel.  The Bulldogs alum sports a good mid-80s slider. 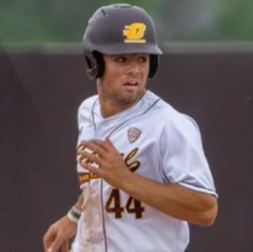 ROUND 6, 180TH OVERALL
JAKOB MARSEE, OF, CENTRAL MICHIGAN (Hometown:  Allen Park, MI.  Photo right via mlb.com screenshot)
The Padres take their first outfielder of the draft.  Marsee was a 2022 All-MAC First Team selection.  Not the tallest at 6’0”, but he has some power and arm strength and batted in 66 RBI this past spring.  An underrated player who didn’t go unnoticed by scouts. 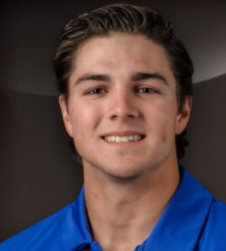 ROUND 7, 210TH OVERALL
NICK VOGT, OF, UC SANTA BARBARA (Hometown:  Woodland, CA.  Photo left via mlb.com screenshot)
The first California product taken by the Padres and a familiar name to SDSU baseball fans.  A 2022 All-Big West Second Team selection.  He batted a .317 average in 205 at-bats with 49 RBI in the spring.  He slugged well above .541.  Not a great runner, but has a great arm, good instincts and good pitch recognition and really came into his own this season after not playing a lot his first two seasons at UCSB. 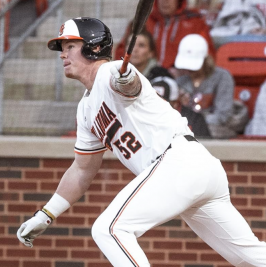 ROUND 8, 240TH OVERALL
GRIFFIN DOERSCHING, 1B, OKLAHOMA STATE (Hometown:  Greendale, WI.  Photo right via okstate.com)
Doersching is all power and it shows at 6’4”, 251.  He’s a Northern Kentucky graduate transfer who mashed for the Norse, with 20 home runs and 48 RBIs in 48 games.
ROUND 9, 270TH OVERALL 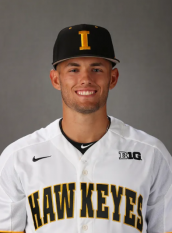 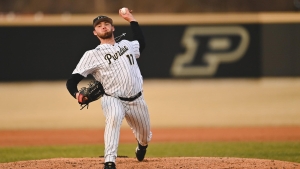 JACKSON SMELTZ, LHP, PURDUE (Hometown:  Lafayette, IN.  Photo right via purduesports.com)
For their last pick of the day, the Padres go with another college southpaw.  Smeltz was the 2022 All-Big Ten Third Team selection.  He has a 92-93 mph heater that can occasionally reach as high as 98.
UP NEXT
The rapid fire day 3 is tomorrow at 11 a.m. and concludes the draft with rounds 11-20.