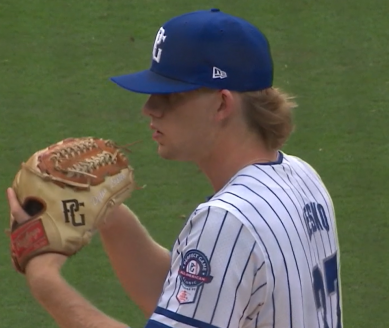 By Liz Alper
July 17, 2022 (Los Angeles) - It’s that time of year again.  For the next three days, ECM Sports has the scoop on new Padres in the 2022 MLB Draft.  Click the cut to see who the Padres picked in Rounds 1 and 2 and in Competitive Balance Round A and keep an eye out for any East County high school or SDSU/East County college kids getting the call.
ROUND 1, 15TH OVERALL
DYLAN LESKO, RHP, BUFORD HS (Buford, GA.  Photo above via mlb.com screenshot)
Touching 97 with his fastball, the 18-year-old is the #14 prospect on MLB.com.  He’s had a Tommy John surgery and according to MLB Network’s analysts, won’t pitch until next summer, but according to former MLB pitcher Greg Maddux, his pitches are solid, with a good fastball and changeup, though his curveball needs a little work.  He became the first junior ever to claim the Gatorade National Baseball Player of the Year award for Georgia in 2021.  Committed to Vanderbilt. 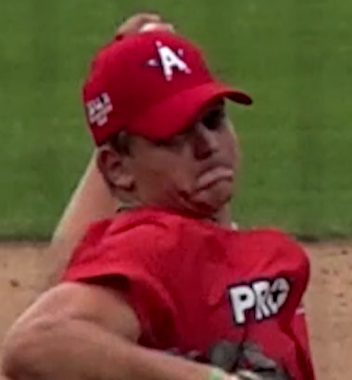 COMPETITIVE BALANCE ROUND A, 39TH OVERALL
ROBBY SNELLING, LHP, MCQUEEN HS (Reno, NV.  Photo right via mlb.com screenshot)
The Padres went with a right hander for their first round pick, now they go with a southpaw.  Snelling won 2022 Gatorade Player of the Year for the state of Nevada.  Was a football prospect before deciding to focus on baseball.  Thanks to his football background, he has a big physical presence at 6’3” and can easily fit into a starting rotation.  He has plenty of baseball pluses too, with a fastball that reaches 94-97.  His best pitch is his curve, reaching the upper 70s.  Committed to LSU. 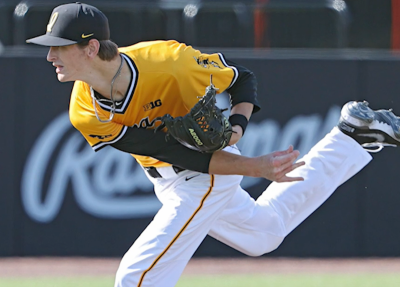 ROUND 2, 53RD OVERALL
ADAM MAZUR, RHP, IOWA (Hometown:  Woodbury, MN.  Photo left via mlb.com screenshot)
The Padres’ last pick of day one is their first college pick.  A South Dakota State transfer, Mazur recorded a 1.55 ERA last summer in the Cape Cod League.  His best pitch is his 82-86 slider.  He throws a 2-seam and 4-seam fastball and has a decent changeup.  He dealt with a back issue and still is working on control, but experts feel he can develop into a decent three-pitch starter. 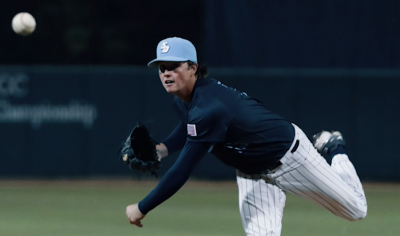 EAST COUNTY MENTION:  BRYCEN MAUTZ, RHP, USD (Westview).  ROUND 2, 69TH OVERALL TO THE ST. LOUIS CARDINALS (Photo right via mlb.com screenshot)
Drafted on his 21st birthday.  Mautz has a high-energy delivery.  He's starting to get control of his pitches, sporting a fastball that can occasionally reach 97 and a low 80s slider.  He gets hitters to ground out a lot and is a big swing-and-miss pitcher.
UP NEXT
Day two of the draft picks up tomorrow at 11 a.m. with rounds 3-10.