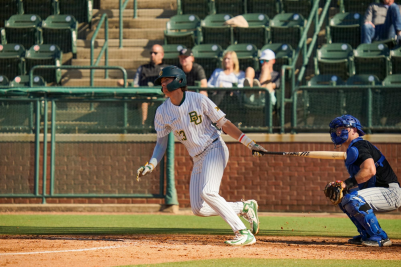 By Liz Alper
Photo:  Phil Nevin's son Kyle, a Poway High alum, was drafted by the Dodgers in the 11th round.  Photo via baylorbears.com
July 19, 2022 (Los Angeles) - The Padres had a fairly solid day two, maxing out their infield and outfield.  Click the cut to see who they took on the final day of the draft and keep an eye out for any East County high school or SDSU/East County college kids getting the call. 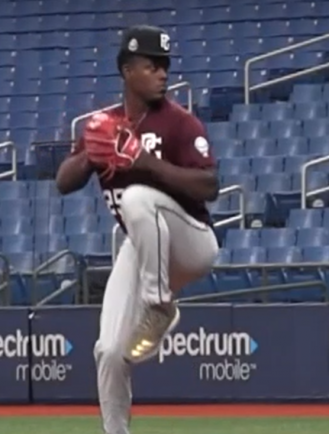 ROUND 11, 330TH OVERALL
ISAIAH LOWE, RHP, COMBINE ACADEMY (Lexington, NC.  Hometown:  Shelby, NC.  Photo right via YouTube screenshot)
For their first pick of the day, the Padres go with a pitcher from a specialty baseball school in North Carolina.  Lowe can also play third base and as a hitter, he makes contact with the ball very well.  He has a quick arm with pitch speeds that can reach 97 and a fastball that reaches 96.  Committed to Wake Forest.
EAST COUNTY MENTION:  KYLE NEVIN, RF, BAYLOR/POWAY HS.  11TH ROUND, 345TH OVERALL TO THE LOS ANGELES DODGERS
The son of Padres great Phil Nevin, Kyle started in 45 of 46 games in 2021.  He doesn’t hit a lot of home runs, but had 10 putouts this past spring, showing that he has a great arm from right field.  He had 65 hits with 37 runs and 49 RBIs.  A little bit error-prone and will sometimes have multiple errors in a game, but can go multiple games without committing a mistake. 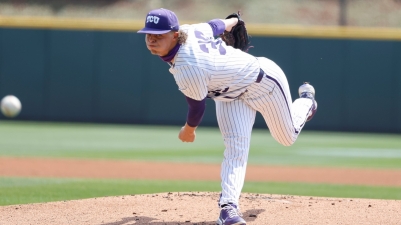 ROUND 12, 360TH OVERALL
AUSTIN KROB, LHP, TCU (Hometown:  Lisbon, IA.  Photo left via gofrogs.com)
Another southpaw.  His ERA was a little high this past spring at 5.12, but he recorded an 11-1 record over 128.1 innings and only gave up three homers and striking out a whopping 45 batters.  His hit total for the spring was high too, however, at 31.  His hit and run totals are a bit high too, so if he can get those down, in our opinion, he will be a strikeout king alongside Yu Darvish. 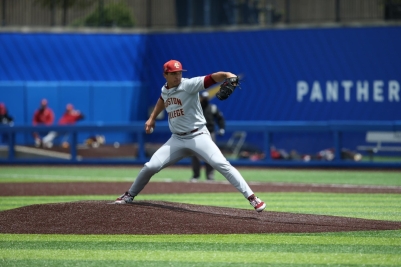 EAST COUNTY MENTION:  MASON PELIO, RHP, BOSTON COLLEGE/RANCHO BERNARDO HS.  12TH ROUND, 363RD OVERALL TO THE CINCINNATI REDS (Photo right via bceagles.com)
The Broncos alum made his way back East to Boston and pitched 18.2 innings of relief and struck out five batters against Virginia on March 20.  He’s prone to giving up hits, but made up for it with 21 strikeouts total. 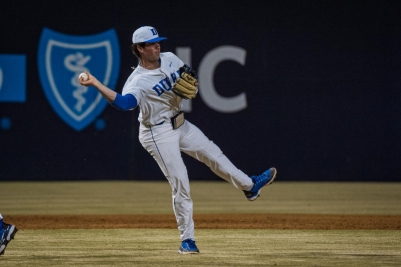 ROUND 13, 390TH OVERALL
GRAHAM PAULEY, 3B, DUKE (Hometown:  Milton, GA.  Photo left via goduke.com)
The Padres take their second Duke product of the draft.  Pauley started all 54 games of 2022 at third.  He’s selective at the plate and can both mash and be patient, putting up 62 hits and 32 walks.  He came in second on the team with 33 RBIs and led the team with a .292 batting average.
EAST COUNTY MENTION:  ANDREW OWEN, RHP, GROSSMONT COLLEGE.  14TH ROUND, 409TH OVERALL TO THE TEXAS RANGERS (no photo or stats) 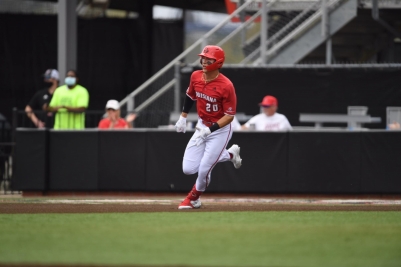 ROUND 14, 420TH OVERALL
TYLER ROBERTSON, CF, LOUISANA-LAFAYETTE (Hometown:  Montgomery, AL.  Photo right via ragincajuns.com)
He looks like he has power and does.  Robertson started almost every game for the Ragin’ Cajuns this spring and scored 41 runs and drove in 33 RBIs in 210 at-bats.  Fielding-wise, he does have a few errors, so not sure if the Padres are the best organization to work with him on that.  But he can be a solid bat for the Friars alongside Manny Machado. 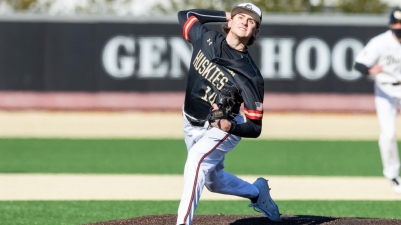 ROUND 15, 450TH OVERALL
THOMAS BALBONI, RHP, NORTHEASTERN (Hometown:  Naples, FL.  Photo left via nuhuskies.com)
Climate change won’t be an issue for this Florida native, who went to school in the cold of New England and now will be heading out to sunny San Diego.  He needs an opportunity to show what he can do, only having pitched in 21 innings this past spring, but making up for it with 25 strikeouts.  Not very hit-prone, only giving up 12 with 10 runs and 13 walks, but will still need to get those totals down if he wants to avoid having a MacKenzie Gore-like time on the mound.
ROUND 16, 480TH OVERALL
HENRY MARTINEZ, RHP, MIAMI CHRISTIAN SCHOOL (Hometown:  Hialeah, FL.  No photo)
The Padres go back to high school with round 16.  Not much is known about Henry, but he does have a fastball that reaches 94.  He’s a big kid at 6’4” and he’s ranked 79th overall in the state of Florida.  Committed to play college ball at Florida International.

ROUND 17, 510TH OVERALL
HUGH PINKNEY, C, SILVERTHORN COLLEGIATE INSTITUTE (Etobicoke, Ontario, Canada.  Hometown:  Toronto.  Photo right via scarletknights.com)
The Padres take their annual one Canadian off the board with their 510th pick.  Pinkney really should have gone off the board sooner, as he’s one of the best Canadian pitchers, ranking 20th in Ontario on Perfect Game USA and the #1 catcher, according to the site.  He’s big for a catcher, at 6’2”, and can also play outfield.  His throwing is a little on the slow side at 76 and running is a little slow at 7.29, but his pop velo is average and can get better.  He’s coming to the States for his college career, announcing his commitment to play at Rutgers, where head coach Steve Owens says, “He is a very good left-handed hitting catcher with soft hands and plus arm strength.” 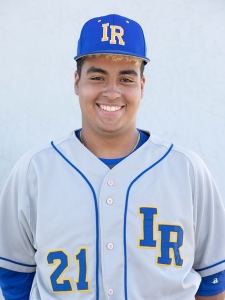 ROUND 18, 540TH OVERALL
ROMEO SANABRIA, C, INDIAN RIVER STATE COLLEGE (Fort Pierce, FL.  Photo left via irsc.prestosports.com)
This is a big kid, not as big as Luke Voit, but big.  A sound player behind the plate but needs to get stronger with the bat, according to ProspectWire.
ROUND 19, 570TH OVERALL
SPENCE COFFMAN, SS, TISHOMINGO COUNTY HS (Tishomingo, MS.  Hometown:  Corinth, MS.  No photo)
That’s a mouthful and so is this kid, the #3 shortstop in the state of Mississippi.  He could be a viable replacement for the injury-prone Fernando Tatis Jr.  He’s fast too; he can run a 10-yard split in 1.53 seconds and a 60-yard dash in 6.45.  His exit velo is 95, meaning he’ll be useful in routine throw-to-first situations and especially in double play situations.  He does need work on his swing.  Committed to play college ball at Southeastern Louisiana. 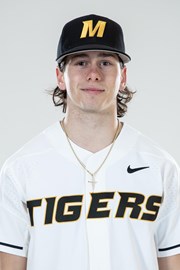 ROUND 20, 600TH OVERALL
ANDREW VAIL, LHP, ROWAN UNIVERSITY (Glassboro, NJ.  Hometown:  Washington Township, NJ.  Photo right via mutigers.com)
With their last pick of 2022, the Padres select another southpaw.  Vail has bounced around the country trying to find the right school for him.  First at Maryland, then at Mizzou and now at Rowan in his home state of New Jersey.  His ERA during both of his seasons (2020 and 2021) at Missouri was high, so we don’t think he’ll see a starting job, but he can be effective against right-handers if he can get his hit and run totals down.