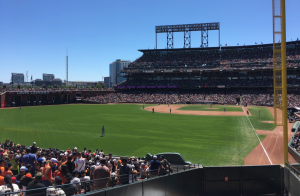 April 30, 2017 (San Francisco) - The Padres surged back from a 3-1 deficit last night to win 12-4 and even the series against the Giants.  They’d try to win it all here with Clayton Richard on the mound against Ty Blach for the Giants.

No runs were scored until some pitcher magic in the fifth when Blach hit a sac fly to score Joe Panik and the Giants took a 1-0 lead.

Michael Morse added one more in the sixth with a double that scored Hunter Pence and the Giants took a 2-0 lead.

All seemed lost until the ninth inning.  Hector Sanchez knocked out the equalizer; a two-run home run to tie the game at two.  We were headed to bonus baseball.

It was a pitchers’ duel; both teams exhausted their bullpens until the 12th inning.  George Kontos was pitching for the Giants and Wil Myers came to the plate.  He was 0-for-5 all day, but he came to the plate and blasted a 90-mile-per-hour ball over the Giants’ vulnerable left field wall for a three-run homer and the Padres won the series two games to one with a 5-2 win.

Now that that road trip is over, the Padres get a day off and return home to face the Rockies, who are vying for first in the NL West.  First pitch at Petco is at 7:10 p.m. on Tuesday.  Tyler Chatwood will start for Colorado against Trevor Cahill for the Padres.