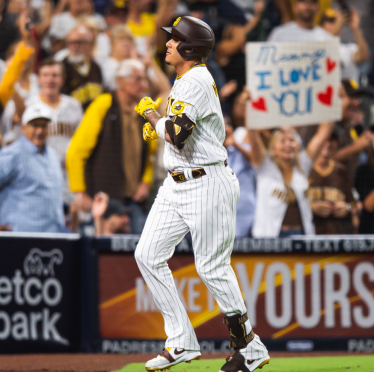 By Liz Alper
Photo via @padres on Twitter
August 18, 2022 (San Diego) - The Padres were defeated in Miami, so it wasn’t a fun vacation.  They came home for the weekend to host the Nationals, who they’d faced last week.  Anibal Sanchez started tonight’s game one for the Nationals against Yu Darvish.

We were scoreless until the third when Ildemaro Vargas blasted a solo homer to deep right and the Nationals led 1-0 after three.

Manny Machado saved the day in the fourth with an absolute bomb to left and we were tied at one after four.
The Padres threatened in the seventh, but it was the Nationals who capitalized in the ninth by loading the bases.  Josh Hader walked Nelson Cruz, allowing Cesar Hernandez to score from third.  Keibert Ruiz hit a line drive sac fly to left that scored Alex Call and the Nats prevailed to take game one 3-1.
UP NEXT
Game two is tomorrow night at 6:40 p.m.  Paolo Espino starts for Washington against Blake Snell.