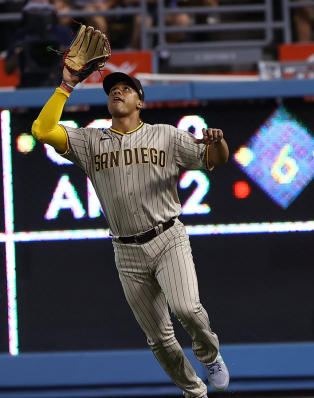 By Liz Alper
Photo via @padres on Twitter
August 5, 2022 (Los Angeles) - After a great series against the Rockies, the Padres left home for a weekend in L.A. against the NL West-leading Dodgers.  Sean Manaea started game one tonight against Tony Gonsolin for L.A.

The Padres threatened in their half of the first, but were stopped, allowing the Dodgers to capitalize in the home half with a single by Will Smith that, thanks to Padres’ing, allowed two runners to score.  Hanser Alberto grounded a two-RBI double down the third base line that scored another two and the Dodgers led 4-0 after one.

They added more in the third with Chris Taylor’s sharp double down the third base line again that scored another deuce and another deuce came from Cody Bellinger doubled to right and the Dodgers led 8-0 after three.
The lone Padres run came on a Brandon Drury sac fly to right in the ninth that scored Josh Bell, but the Dodgers ended up sending the Padres back to the hotel packing with an 8-1 win.
UP NEXT
Game two tomorrow is an hour earlier at 6:10 p.m.  Mike Clevinger starts against Andrew Heaney for the Dodgers.