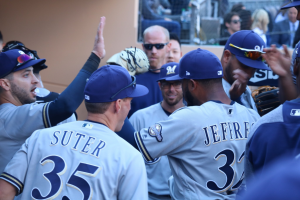 Photo:  Brewers reliever Jeremy Jeffress forced a double play to stop a chance for the Padres to take the lead with the bases loaded in the 11th.  Via @Brewers on Twitter.

March 29, 2018 (San Diego) - Well, it’s finally here.  Opening Day. The smell of freshly cut grass fills downtown San Diego.  And California weather is done with its usual act-like-a-normal-state-and-give-my-citizens-actual-winter-weather-three-months-after-the-holidays phase and is ready for spring too,  The only thing we were waiting on is the Padres. Will they do well? Will they stink? Did spring training pay off? Let’s start baseball 2018! In today’s first game against the Brewers (kind of a welcome change from getting clobbered by the Dodgers for the past two Opening Days), Chase Anderson started for Milwaukee against Clayton Richard.

In yet another great Padres season opener, former Marlin Christian Yelich singled to score Anderson and the Brewers took a 1-0 lead.  And in typical Padres fashion and probably the most boring Opening Day in the history of baseball, one run was all the Brewers needed to take game one.

This can also be considered typical Padres fashion too because they always wait till the last minute to do things, but in the bottom of the ninth, newbie Freddy Galvis singled to right to score Matt Szczur and the Padres tied the game.  We had extra innings on Opening Day.

But more typical Padres fashion occurred in the 12th when, after Ji-Man Choi’s double, Orlando Arcia singled him in for the Brewers