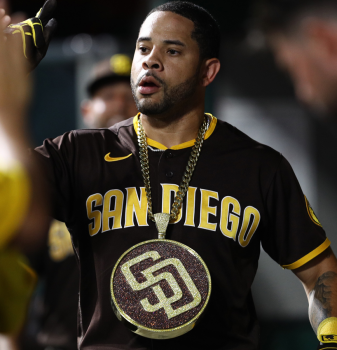 By Liz Alper
Photo:  Trent Grisham via @padres on Twitter
June 29, 2021 (Cincinnati) - The Padres were back in action today, starting their tour of the East coast in Cincinnati.  There was a last minute pitching change due to Blake Snell being out with an illness and Craig Stammen started today’s game one against Tony Santillan for the Reds.

After a half-hour rain delay, we were ready to go.  Jake Cronenworth definitely was, as he tripled on a slow ground ball to right in the first to score Fernando Tatis Jr.  Manny Machado hit a sac fly to deep right to score Cronenworth and the Padres led 2-0.

The Reds stayed close behind with Tyler Stephenson’s single in the home half of the first up the middle to score Jonathan India and the Padres’ lead was cut in half to 2-1 after one.
The Padres added some padding in the second with Tommy Pham’s sac fly to right with the bases loaded to score Eric Hosmer and the Padres led 3-1 after two.
Pham hit a solo homer in the fourth.  Trent Grisham added some more with a single to right to score Cronenworth and the Padres led 5-1.
Shogo Akiyama hit a single in the home half of the fourth.  Joey Votto was ruled safe at the plate after a review and the Padres led 5-2 after four.
Suddenly, the Reds found themselves within one in the fifth with Jesse Winker’s two-run blast to right center and the Padres were hanging by a thread.  But they were able to hang on to that thread until the end and earn a 5-4 win and move to 48-33.
UP NEXT
Game two is tomorrow at 4:10 p.m.  Grossmont High alum and Padres sole no-hitter owner Joe Musgrove will start against Vladimir Gutierrez for Cincy.
OTHER NEWS
TRANSACTIONS