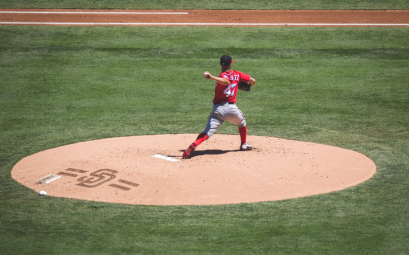 Photo:  Gio Gonzalez, who nearly pitched a no-hitter a few weeks ago, had only one unearned run today and zeros the rest of the day.  Via @Nationals on Twitter

August 20, 2017 (San Diego) - Finally, the Padres got the upper hand over the Nationals last night, winning 3-1.  Today, they went for the split with Gio Gonzalez on the mound for the Nationals against Dinelson Lamet.

Jabari Blash scored in the first and the Padres took a 1-0 lead.

But Daniel Murphy erased that with a sac fly in the third that tied the game.

Murphy gave the Nats an eventual lead too in the fifth with a single that scored Alejandro De Aza.  Buddy Baumann came in to relieve Lamet, but the Nationals lit him up too with a single from Adam Lind that scored Murphy.

Edwin Jackson added one more run in the eighth and the Nationals sealed the 4-1 win over the Padres and the series win three games to one.

The Padres get a day off before traveling to St. Louis on Tuesday.  Clayton Richard starts against Lance Lynn for the Cardinals.  First pitch is at 5:15 p.m. on Tuesday.