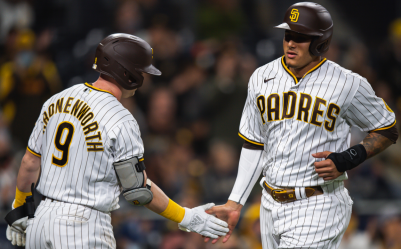 By Liz Alper
Photo via @padres on Twitter
May 3, 2021 (San Diego) - With the Giants gone, the Padres get a break from NL West play for a few days and welcome the Bucs to America’s Finest City.  Tyler Anderson started tonight’s game one for the Pirates against Miguel Diaz.

Anderson did not allow a hit until the seventh inning when he walked Manny Machado, gave up a line drive single to Wil Myers and forced Tommy Pham into a sac fly to score Machado, erasing Anderson’s no-hitter and giving the Padres the first run and lead of the game.  Austin Nola hit a gapper to right center that scored Myers and forced Anderson out of the game.  He was replaced with Clay Holmes, who got the final out, but the Padres were able to take a slow opening contest with a 2-0 win and move to 17-13.

UP NEXT
Game two is tomorrow at 7:10 p.m.  Mitch Keller starts for Pittsburgh.
TRANSACTIONS