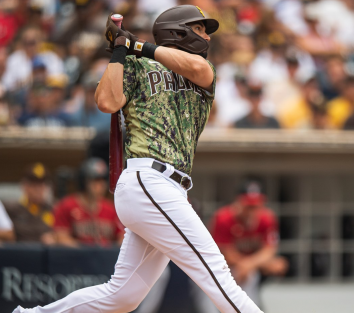 By Liz Alper
Photo via @padres on Twitter
July 17, 2022 (San Diego) -  The Padres have taken two out of three from Arizona and they looked for the series win today on the last day before the All-Star break.  Merrill Kelly started for Arizona against Mike Clevinger.

We were scoreless through five until David Peralta launched a huge solo homer to right in the sixth and the Dbacks led 1-0 after six.

Steven Wilson was brought on in the seventh after the Diamondbacks loaded the bases, but issued a walk to Jordan Luplow that scored ex-Padre Sergio Alcantara.  Another walk was issued to Christian Walker to score Carson Kelly from third and to kick Wilson out of the game.  He was replaced by Adrian Morejon, who got the last out and Luke Voit put the Padres on the board with a high solo homer to right, but the Diamondbacks prevailed and avoided the sweep with a 3-1 win.
UP NEXT
Watch Joe Musgrove, Manny Machado and Jake Cronenworth in the All-Star game on Tuesday.  The Padres are back in action on Friday with a trip to New York to face the Mets.  First pitch on Friday is at 4:10 p.m. and will be MLB.tv's free game of the day.