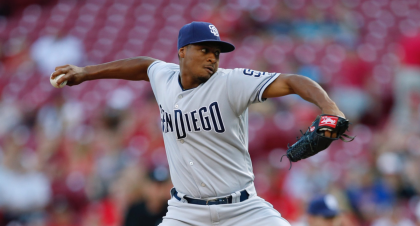 August 8, 2017 (Cincinnati) - The Reds shocked the Padres last night, but tonight, the Padres would hopefully rebound with Luis Perdomo on the mound against Sal Romano for the Reds.

The Padres took advantage right away, hoping to change the result of last night.  Yangervis Solarte grounded out in the first to score Carlos Asuaje.  Romano tossed a wild pitch that scored Jose Pirela and the Padres jumped out to a 2-0 lead.

In the second, Dusty Coleman’s sac fly scored Cory Spangenberg to make it 3-0.

Another sac fly by Wil Myers in the fifth made it 4-0.

In the sixth, the Padres stopped taking baby steps and took a giant leap forward with Austin Hedges’ homer that made the score 5-0.

Solarte one-upped him in the seventh with a two-run homer that made it 7-0.

Tucker Barnhart finally got the Reds on the board in their half of the seventh with a monster three-run blast.  That’s all the scoring they’d do as the Padres held on to take game two 7-3.

Game three is tomorrow at 4:10 p.m.  Travis Wood starts against a mouthful--Asher Wojciechowski--for the Reds.