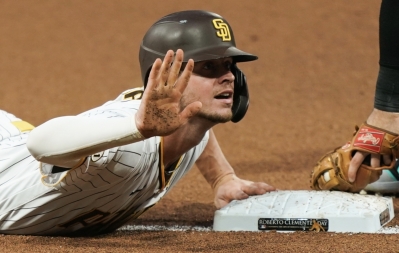 Photo: Wil Myers' RBI triple in the sixth gave the Padres the lead they needed to win. Via @padres on Twitter

September 9, 2020 (San Diego) - The Padres got a monumental 14-5 win last night, hitting their season high for runs scored and took the series against the Rockies.  Tonight, they looked for the sweep.  Antonio Senzatela started for Colorado against Zach Davies.

Like last night, the Rockies broke the tie in the first with a towering solo homer from Trevor Story to give Colorado a 1-0 lead.

But also like last night, the Padres had the answer, as in the home half of the first, Mitch Moreland blasted his first home run as a Padre to right, good for two runs and the Padres led 2-1 after one.

It stayed that way for a while until the sixth when the tables turned again; former Padre Matt Kemp launched a two-run homer to left center to put the Rockies on top 3-2.

And then the tables turned AGAIN.  In the home half of the sixth, Wil Myers tripled and scored Moreland to tie the game.  Jake Cronenworth put the Pads back on top with an RBI ground ball single that scored Myers to give the Padres a 4-3 lead after six.

Austin Nola added the insurance run in the eighth with an RBI single to left center to score Myers and the Padres successfully swept the Rockies with a 5-3 win.

The Giants come to town for the weekend.  First pitch tomorrow night is at 6:10 p.m.  Trevor Cahill starts for San Francisco against Chris Paddack.