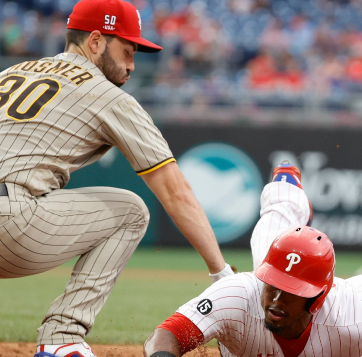 By Liz Alper
Photo via @padres on Twitter
July 2, 2021 (Philadelphia) - With a series win against the Reds under their belt, the Padres traveled further east to Philadelphia to face the Phillies in a very fitting setting for the Fourth of July weekend.  Chris Paddack started today’s game one against Zack Wheeler for the Phillies.

The Phillies got things started in the first when Odubel Herrera and Jean Segura scored to give Philadelphia a 2-0 lead after one.

Didi Gregorius added onto the lead with a line drive solo homer to right in the fifth and the Phillies led 3-0 after five.
It looked like that was going to be it.  It looked like the Phillies had the game in the bag.  But in the ninth with two outs, Jurickson Profar saved the day with a grounded double down the left field line to score two.  We were tied at three and going to extra innings.
But in the 10th, the Padres were so close to getting to the 11th when Brad Miller doubled to center to score Andrew McCutchen and the Padres lose their second straight walkoff by a score of 4-3 and fall to 49-35.
UP NEXT
Game two tomorrow is at 1:05 p.m.  Yu Darvish will start against Zach Eflin for the Phillies.  The game will be broadcast on FS1 as well as on BSSD.