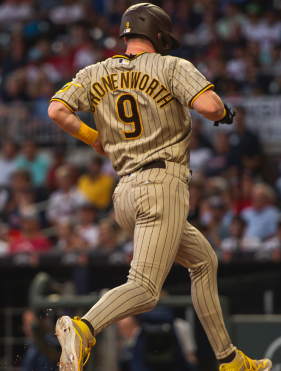 By Liz Alper
Photo via @padres on Twitter
July 20, 2021 (Atlanta) - The Padres’ euphoria at 24 runs in Washington was cut short by a shooting on Saturday night, so they were grateful to get out of Washington and head south to Atlanta.  Yesterday’s game was postponed by rain, so Yu Darvish started tonight’s game one against Touki Toussaint for the Braves.

In the second, after former Padre Abraham Almonte doubled, Guillermo Heredia did the same thing to left to score him and the Braves took a 1-0 lead after two.

Tommy Pham tied the game in the fourth with a sac fly that scored Jake Cronenworth and we were tied at one after four.
The Braves easily reclaimed the lead in the sixth when none other than Freddie Freeman knocked out a solo homer.  That, hitting Austin Riley and a walk signaled the end of the night for Darvish.  Tim Hill replaced him and finished the inning, but the Braves took game one with an easy 2-1 win.  The Padres move to 55-42.
UP NEXT
Games two and three will be played as a doubleheader tomorrow at 9:20 a.m. and 2:20 p.m.  A pitcher yet to be named will start against Kyle Muller for the Braves in game two.  Game two will be on MLB Network as well as BSSD and will also be tomorrow’s MLB.tv free game of the day.
TRANSACTIONS