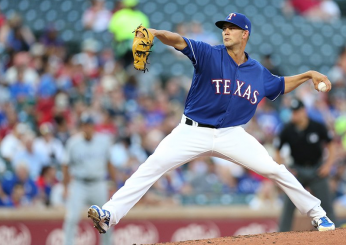 June 27, 2018 (Arlington) - Last night, the Padres turned the tables and came from behind to get the win and even the series against the Rangers.  Tonight, they tried to take the series with Clayton Richard on the mound against Mike Minor for the Rangers.

The Rangers got the upper hand to start with.  Adrian Beltre doubled in the third on a sharp grounder to right to score Elvis Andrus.  Jurickson Profar got his 32nd RBI of the year with a golfed line drive to left that scored Beltre and the Rangers went up 2-0.

More came in the fourth when Delino DeShields dropped a safety squeeze bunt that scored Joey Gallo to make it 3-0 Rangers.

One more run came in the seventh when Travis Jankowski failed to catch a fast-falling popup from Isiah Kiner-Falefa.  Rougned Odor scored and the Rangers took their lead to 4-0.

Just like last night, the Padres started making noise in the eighth when Austin Hedges lined an RBI single to right with runners at first and third to score Christian Villanueva.  New pitcher Jose Leclerc came in and walked Eric Hosmer with the bases loaded.  Jose Pirela took a stroll home and cut the lead in half.  But that’s all the Padres would get.

Ryan Rua blasted his third home run of the season; a solo homer to right and the Rangers took the series 2-1 with a 5-2 win.

The Padres get a day off before coming home and returning to National League play with a weekend series hosting the Pirates.  First pitch Friday night is at 7:10 p.m.  Grossmont High alum Joe Musgrove makes his return to San Diego on the mound for the Pirates against Eric Lauer.