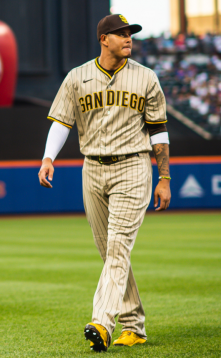 By Liz Alper
Photo via @padres on Twitter
July 23, 2022 (New York) - The Padres started the second half nicely last night with a win in New York.  They tried to take game two tonight with Blake Snell on the mound against Chris Bassitt for the Mets.

We had a great pitchers duel until the sixth when Manny Machado lined a two-run homer to left that got out of the yard in a hurry and the Padres led 2-0 after six.

The lone Mets run was on a J.D. Davis single in the ninth.  The Padres took the series with a 2-1 win.
UP NEXT
Game three is tomorrow night at 4:08 p.m. and will be on ESPN only.  Grossmont High alum Joe Musgrove starts against Carlos Carrasco for New York.
TRANSACTIONS