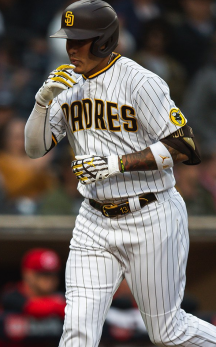 By Liz Alper
Photo via @padres on Twitter
May 6, 2022 (San Diego) - The Padres found that not playing fancy, but playing smart wins ballgames.  Tonight they tried for another win with Sandy Alcantara on the mound for the Marlins against Yu Darvish.

It was Eric Hosmer that started things again in the first with a double to right that scored Manny Machado and the Padres led 1-0 after one.

The Padres threatened again in the fifth as Matt Beaty doubled to score Trent Grisham.  Machado singled on a line drive to left to score Beaty and the Padres led 3-0 after five.
But just like that, the Marlins were within one as Jesus Aguilar homered for two in the sixth, but the Padres held on for the slim 3-2 win–despite the Marlins threatening in the ninth–to claim a 2-0 series lead.
UP NEXT
Game three is tomorrow at 5:40 p.m. and will be one of mlb.tv’s free games of the day.  Pablo Lopez starts for Miami against Sean Manaea.