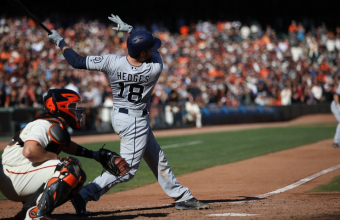 Photo:  Austin Hedges' clutch double in the ninth gave the Padres the win.  Via @Padres on Twitter

September 30, 2017 (San Francisco) - Two more...bear with us, it’s almost over.  Jhoulys Chacin started today against Matt Cain in his last major league start; he announced his retirement earlier this week.

Pablo Sandoval tried to speed up both teams’ deaths by scoring in the second to give the Giants a 1-0 lead.

Wil Myers tied it up, though, with a solo homer in the sixth.

The Giants still got the better of the Padres, however, with Hunter Pence’s RBI single in the seventh to take game two and the last series of the year 2-1.

WAIT!  HOLD ON!  Austin Hedges said “not so fast!” and doubled in the top of the ninth, scoring two and the Padres got the upper hand over the Giants, winning 3-2 and evening up the series at a game apiece.

The Padres’ final game of the season will be tomorrow at 12:05 p.m.  Luis Perdomo starts against Johnny Cueto for the Giants.