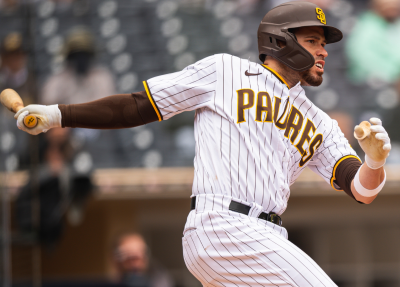 By Liz Alper
Photo via @padres on Twitter
April 21, 2021 (San Diego) - The Brewers came into San Diego struggling and thanks to some classic Padres’ing, are leaving feeling pretty good about themselves.  The Padres tried to salvage at least one game today in the series finale.  Adrian Houser started for Milwaukee against Dinelson Lamet, making his return to the Padres’ rotation after being on the IL.

Finally, the Padres got the upper hand.  In third, Trent Grisham singled on a ground ball to left to score Victor Caratini and the Padres led 1-0 after three.

But it was short-lived; after Tim Hill relieved Craig Stammen (who replaced Lamet due to right forearm tightness) in the fourth, Jace Peterson singled on a line drive to left that scored Omar Narvaez to tie the game at one.
The Padres regained the lead on Caratini’s sac ground out that scored Jurickson Profar and San Diego led 2-1 after four.
The Padres managed to make that last two innings.  But in the sixth, Narvaez blasted a two-run go-ahead bomb to right off of Keone Kela for home run number three on the season.  It was followed by Peterson’s solo homer to right to give the Brewers the lead.  The Padres threatened with the bases loaded in the eighth, but the Brewers came away with the 4-2 win and the sweep.  The Padres fall to 10-10.
UP NEXT
We just recovered from that intense Dodgers-Padres series, but now the Padres get to pay a visit to LA for four games.  First pitch tomorrow night is at 7:10 p.m.  Ryan Weathers starts against Walker Buehler for LA.