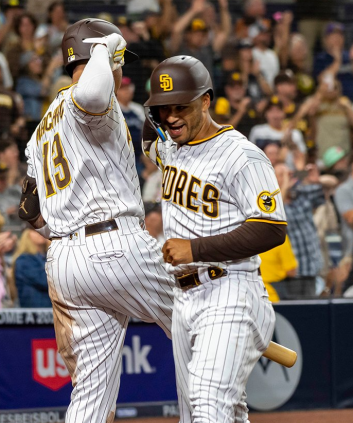 By Liz Alper
Photo via @padres on Twitter
August 1, 2022 (San Diego) - The Padres kicked off August in second place in the NL West, 12 games behind the Dodgers.  They also kicked it off back in NL West play with five games against the Rockies.  Antonio Senzatela started tonight’s game one for Colorado against Mike Clevinger.

Jurickson Profar started the scoring with a solo homer in the first.  Wil Myers hit a sac groundout to score Manny Machado.  Nomar Mazara singled to score Jake Cronenworth and the Padres led 3-0 after one.

The Rockies got on the board in the sixth with a sac fly by Brendan Rodgers in the sixth to score Jose Iglesias.  The Padres led 3-1 after six.
Trent Grisham added more with a homer to left in the seventh and the Padres pulled off a 4-1 win in game one.
UP NEXT
The Padres and Rockies will play a doubleheader tomorrow with games at 1:10 p.m. and 7:10 p.m.
TRANSACTIONS