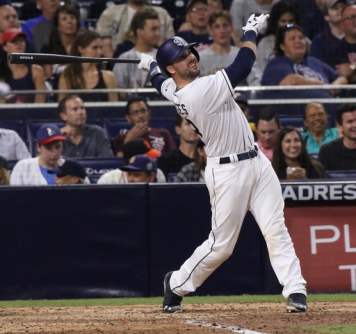 Photo:  Austin Hedges' two-run homer sealed the win for the Friars against the Twins.  Via @Padres on Twitter

August 1, 2017 (San Diego) - After a successful homestand against the Pirates, the Padres kicked off August with interleague play as the Minnesota Twins came to town.  Jose Berrios started for the Twins against Jhoulys Chacin.

This is going to sound unbelieveable, but no runs were scored until the sixth inning.  Now usually when that happens, it’s the Padres giving up and letting their opponent score, but this time, it was the Padres breaking the tie.  With runners on second and third, Manuel Margot hit a sac fly that scored Hunter Renfroe and the Padres took a 1-0 lead.

Austin Hedges added the only other run of the game--a two-run homer in the eighth and the Padres took game one easily with a 3-0 win.

We haven’t had a lot of the old Wednesday home day games this season, but we’ll have one tomorrow because game two is at 12:40 p.m. and will be back on FSSD.  Ervin Santana starts for the Twins against Luis Perdomo.