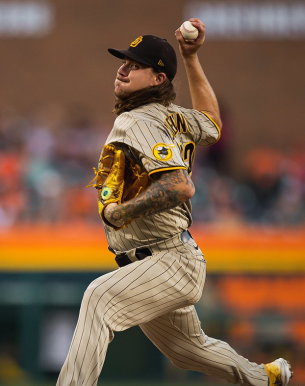 This time, the Padres got the upper hand.  Luke Voit doubled in the third to score two and Jorge Alfaro doubled to score Voit and the Friars led 3-0 after three.

Jeimer Candelario brought the Tigers to within one with a two-run blast in the seventh, but the Padres held to a 3-2 win after seven.
The game looked sealed, but in the ninth, the Tigers fought to get men on base and Riley Greene scored Willi Castro with a single to right and we were tied at three and going to extras.
Luckily, in the 10th, the Padres wasted no time loading the bases and Voit was hit by a pitch, allowing Jurickson Profar to score from third.  James Foley was brought in to pitch and gave up a two-RBI single to right to Alfaro.  Candelario doubled in the home half to score Javy Baez, but the Padres got lucky and split the series with a 6-4 win.
UP NEXT
Stream tomorrow’s game at work; it’s at 10:10 a.m. and can also be seen on MLB Network.  Yu Darvish starts against Tarik Skubal for Detroit.
TRANSACTIONS