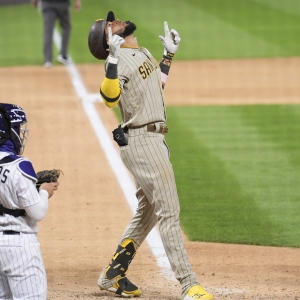 Photo: Fernando Tatis Jr. saved the day twice for the Padres, with an RBI single and a homer. Via @padres on Twitter

July 31, 2020 (Denver) - After a good series against the Giants, the Padres turned their sights eastward to Denver and a weekend series with the Rockies.  Garrett Richards started tonight’s game one against Jon Gray for the Rockies.

After a short rain delay, Charlie Blackmon got things started in the second with a two-run homer to give the Rockies a 2-0 lead after two.

The Padres finally got on the board in the sixth when Manny Machado lined an RBI single to right that scored Jake Cronenworth.  Trevor Story flubbed a routine double play grounder by Tommy Pham, Trent Grisham scored and the Padres tied the game.  Gray threw a pitch that got away from Tony Wolters, allowing Machado to slide into home just before the tag was applied and the Padres took the lead, kicking Gray out of the game.  Daniel Bard came in and closed out the inning, but the Padres took a 3-2 lead.

Fernando Tatis Jr. solved that problem in the seventh with a line drive single to right to score Francisco Mejia and tie the game at four.

But Story made up for his previous error by knocking out a solo homer in the home half of the seventh to make it 5-4 Rockies after seven.

Tatis Jr. saved the day again in the ninth with his second home run of the season--a solo shot off the left field stands barrier--to tie the game.  With two on and two out, Pham launched his first homer of the season--a line drive shot to left--to give the Padres the 8-5 lead.

Blackmon got a run back for Colorado in the home half of the ninth with a single to left center that scored David Dahl.  Kirby Yates, in a rare off performance, walked Ryan McMahon with the bases loaded.  Blackmno scored and suddenly, the Rockies were trailing by one again.  Yates left the game and was replaced by Drew Pomeranz, who forced Chris Owings to fly out to center and the Padres held on to win 8-7.

Game two tomorrow is set for 5:10 p.m.  Joey Lucchesi starts against Kyle Freeland for the Rockies.