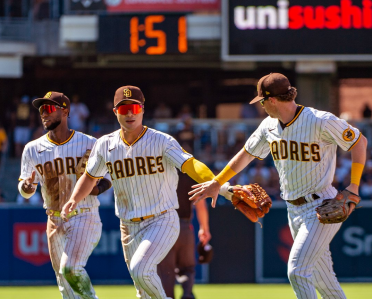 By Liz Alper
Photo via @padres on Twitter
August 2, 2022 (San Diego) - The Padres kicked off August with a win.  Today was a big day as they played a doubleheader with the Rockies.
Game One
Ryan Feltner started game one for Colorado against Yu Darvish.
Randal Grichuk kicked things off with a two-run homer in the second and Brendan Rodgers hit a solo shot in the fourth.  The Padres finally got on the board in the home half with a sac fly by Austin Nola that scored Nomar Mazara and Trent Grisham sealed the tie with a two-run homer that tied the game at three after four.
Ha-Seong Kim got the go-ahead in the fifth with a single that scored Wil Myers and the Padres led 4-3 after five.
Manny Machado added on in the sixth with a sac fly that scored Grisham and Jake Cronenworth hit a two-run homer and the Padres led 7-3 after six.
The Rockies tried to rally in the seventh with José Iglesias’ double that scored Yonathan Daza.  C.J. Cron doubled to score Iglesias, but in the home half, Jurickson Profar doubled to score two, Jorge Alfaro singled to score two and the Padres led 11-5 after seven.
From then on, it was all Kim.  He hit an RBI triple that scored José Azocar and scored himself and the Padres slammed the Rockies in game one 13-5.
Game Two
Jose Urena started the nightcap for the Rockies against Reiss Knehr.
Ryan McMahon started the scoring for the Rockies with a double to right to score Jose Iglesias in the first.  Knehr balked, allowing Brendan Rodgers to score, but the Padres were able to recover, load the bases in the home half and thanks to sac flies by Jorge Alfaro and Wil Myers that scored Jurickson Profar and Manny Machado, tie the game at two after one.
Everything was boring until the ninth.  After Kim was robbed on a strike three call, it looked like we were going to extras, but Grisham stepped up to the plate and launched a line-drive walk-off home run to right and the Padres walked off an exciting long day with a 3-2 win.
UP NEXT
Game four is tomorrow at 6:40 p.m.  Chad Kuhl starts for Colorado.
TRANSACTIONS