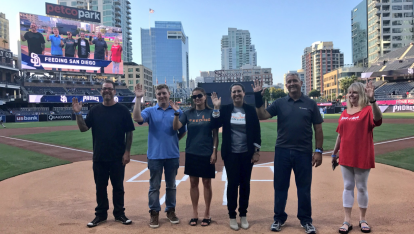 August 30, 2017 (San Diego) - We probably won’t see a night like last night again, for it’s rarer than the solar eclipse. The Padres were spectacular both offensively and defensively in their series-evening win against the Giants.  Tonight they could take the series with Ty Blach on the mound for the Giants against Travis Wood.

This game saw Wood finally do something useful as a Padre when he blasted a solo homer in the third to give the Padres the 1-0 lead.

The Padres were able to keep it a one-run game for a while and Jose Pirela added one more solo homer in the sixth to kick Blach out of the game.  Kyle Crick replaced him and threw a wild pitch that allowed Wil Myers to come home from third.  Austin Hedges singled to left to score Jabari Blash and the Padres scored three runs in the sixth to go up 4-0.

Blash drove in one more insurance run in the eighth with a single to left that scored Myers and the Padres played tremendously again to take the series two games to one with a 5-0 win.

The Padres get Thursday off while the Giants leave, only to be replaced by another, more formidable NL West foe yet again:  the Dodgers.  First pitch is at 7:10 p.m. on Friday night.  The Padres will have to face Clayton Kershaw, fresh off the disabled list, with Dinelson Lamet pitching.  Sounds like fun!